I bring to you today the current thinking in the tank that preserves the document that sealed our fate in the united states of America. Look now at the four copies that I own of the united states constitution set in the foreground of the only sound money approved by the document.  Look at the picture taken in this post of my collection and read these words with an adult attitude (for once).  Four different packages.  One great piece of paperwork.  One great gift to a free nation.  One nation under G_d.  That G_d is the one true and holy universal living Triune G_d revealed in the Bible.  A collection of Spirit inspired stories and living accounts of sin, death, and resurrection that has been preserved now for 4,700 years.  Think how long ago that really is on the timeline of life.

Two thinking points.  One; the paperwork that announced one nation under God.  Two; the real reason it has been defended with the blood of its citizens.

On point one.  We are a nation of civil laws and moral contracts.  The civil part starts with “do no harm” and ends with holding each other “accountable” to a set of simply followed commandments given to us by God.  The greatest of these is “love your neighbor as yourself and love your God with all your heart, soul, and mind.”  ref:  Mark 12 30-31  This commandment alone seems impossible today without the divine touch of truth found in forgiveness.  Can we be different in our thinking on this truth and still live in harmony?  “…All men are created equal” seems to become more of a paperwork thing instead of a heart thing.  That intended message seems to trick us into the (me, myself, and I) reality of just the paperwork words. 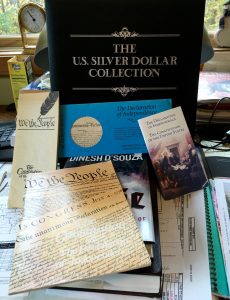 On point two.  We are a nation of dedicated chaps that are willing to defend the principles of a written document.  If I may, I think it started out with a surge of thinking that went like this:  no longer will we take the word of the English government to protect us and our property.  We will protect this ourselves and manage what we produce (ourselves).  That (short) straw was the tea tax.  Then now, if I may continue, morphed into defending the richness of life, liberty, and property at all cost.  Think how important those words became in our nation.  Think how those words are not important in any other nation on the planet.  Think how the religious among us want freedom to tell us “their way” instead of wanting for us a freedom to live our God-given life.  Think how important those three words of (life, liberty, and happiness in our home) has become a give-away program for those wanting something for the mere thought of deserving it rather than working for it.  Individually in our homes and collectively for our nation, we take orders from the very people of position in our nation who supposedly are defending that great piece of paperwork we call the united states Constitution.  I think some of those people are lying with a half-truth that splits this nation of civil law and moral contract wide open to defeat from within.

No chance but one chance.  That chance is to support and defend the united states constitution now more than ever.